The beauty of tree climbing is that it’s a melting pot of many disciplines: rock climbing, sailing, caving, and mountaineering.

With all of their powers combined, we have another style of tree climbing…Stationary Rope Technique (SRT).

In a nutshell, the climbing rope is tied off either at the top of the tree or at the base of the trunk. Then the climber ascends the fixed rope; the rope does not move with the climber like in MRS (Moving Rope System or Double Rope Technique).

Why is this so awesome? Because the rope is not rubbing against the tree creating friction. It also saves the rope from getting covered in sticky tree sap when working in conifers.

One of the biggest advantages of SRT is climbers get to use their larger leg muscles to get into the upper canopies. Less upper body fatigue means better control of the saws which means less accidents.

Thanks to ergonomically-designed gear, climbing arborists can have longer careers. I have seen climbers 40+ years old out perform the younger guys all day long on this system. 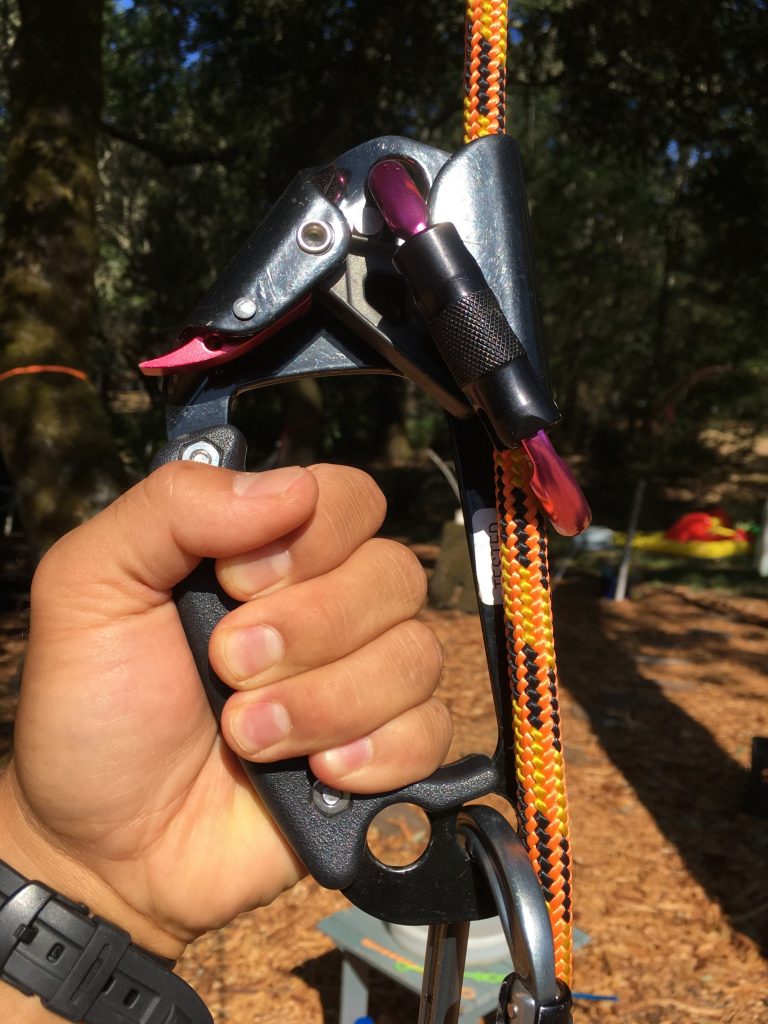 A mechanical hand ascender is much more ergonomic than gripping bare rope. Also, a carabiner can be clipped in to keep twigs and debris out of cam mechanism (TCIA)

Another advantage is the 1:1 pull.

This means when you pull 1 foot of rope, you get 1 foot of vertical lift. SRT is shifting your climbing into high gear compared to MRS which is low gear. Elite climbers can practically run up a vertical rope at amazing speeds! In MRS, you have a 2:1 advantage. When you pull 2 feet of rope, you get 1 foot of vertical lift. While this is slower, you are only lifting ½ of your body weight. (Sherilltree) This is one of the reasons why MRS is frequently used for beginner climbers.

There is a steeper learning curve with SRT compared to MRS.

There are a lot more variables to consider such as:

This is when a rope is run through a branch union and then secured at the base of the trunk. But the force exerted on that union will be twice the weight of the climber. A 160 pound climber will put 320 pounds of force on that union. (Dunlap)

These miraculous little devices have small spiked-teeth on moving cams to give the climber grip on the rope. While they are designed to hold the climber up, they will not take shock loading. A fall greater than 1 meter will cause the teeth to rip the outer jacket of the rope. (Petzl.com) Also, leaves, twigs and other debris can cause the cam mechanism to accidentally open and drop the climber. (Jepson)

There are so many devices on the market right now that allow climbers to ascend in dozens of different ways. While this is great, this can leave more questions than answers for those who are starting out. What’s the difference between a Hitch Hiker and Hitch Climber? How does a Rope Wrench work?

Despite all of the advancements in SRT, MRS is by no means obsolete. This is like comparing nail guns to hammers; Nail guns may be faster, but sometimes you need the simplicity of a hammer.

MRS is usually the tool of choice when:

2) The cost of gear must be kept low

3) Your gear gets lost or damaged and you are left with a rope, carabiner, and harness

Here is an example of one of our own, Chad Brey, and former North American Climbing Champ in SRT action:

Lastly, the TCIA suggests climbing low to the ground (less than 5 feet) and under the supervision of a trainer. Thus, special training is strongly recommended before using SRT.

Thanks for reading and climb safe!