The foliage removed shall be taken primarily from the outer edge of the canopy, not from the interior. No more that 20% of the foliage shall be removed from any tree unless otherwise specified. Dead branches greater than 1.5 inches in diameter (measured at the base of the branch) shall be removed from the canopy of all trees that are pruned. When removing a dead branch, the final cut shall be made outside the collar of the living wound wood tissue. If the collar has grown out along the dead branch stub, only the dead stub shall be removed; the living collar shall remain intact and uninjured regardless of its length. Live branches less than 1.5 inch diameter should not be removed. No live branches or stems greater than 3 inches diameter should be removed from the tree unless otherwise specified.

When removing a live branch at its point of origin on the trunk or from a parent branch, the final pruning cut shall be made in branch tissue just outside the branch bark ridge and collar. No stubs shall be left. (A stub is the remaining branch tissue to the outside of the collar and branch bark ridge.) Live crown ratio should be at least 60% when pruning is completed meaning that no more than the lower 40% of the tree shall be clear of branches.

Removal and reduction cuts shall be used, and not heading cuts.

Never top a tree. Instead, prune to its natural shape.

Clearance pruning shall include removal of branches to provide a minimum of 3 feet from building/structures, 8 feet over sidewalks, and 8 feet from roofs, 14 feet over roadways. Will not prune if the tree is within 10 ft of power lines.

Pruning shall consist of selective pruning to remove the following: dead, diseased, and/or broken branches over 2” diameter. Prune out lowest sucker growth. Include standard clearance: 3 ft from building and structures, 8 ft over the sidewalk, 8 ft from roofs, and 14 ft over the roadway. Will not prune if the tree is within 10 ft of power lines.

A complete pruning of a tree to improve health, aesthetics, and structure. This includes – hazard reduction pruning, removing deadwood, clearance pruning, remove lowest sucker growth, end weight reduction where necessary, and pruning to address structural defects where possible. All pruning to conform to ANSI-A300 industry pruning standards. Will not prune within 10 ft of overhead power lines.

Crown Clean it to include the following: (1) remove dead, broken or diseased limbs 2 inches in diameter or larger; (2) remove rubbing or crossing branches; (3) if two limbs (2-inches diameter or larger) originate within 12 inches of each other on the truck, shorten or remove one of them. (4) Remove weakly attached branches along with suckers and some water sprouts. Do not remove all water sprouts and do not remove only interior branches.

Use directional pruning where possible to future growth is directed away from buildings and lights.

Although small-diameter limbs may occasionally be pruned to gain access into the tree, it will not be necessary to make cuts smaller than 2 inches in diameter, other than where branches may be shortened to accommodate clearance beneath the canopy.

Do not strip out the interior foliage leaving only live branches at the ends of branches. 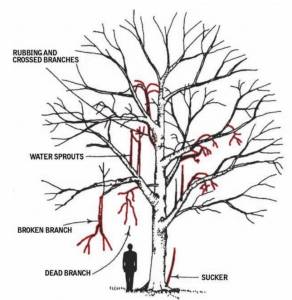 Many trees are over-pruned when the canopy is raised (top right). After proper crown raise, a good goal is to have foliage on branches in the upper 2/3 of the tree (bottom). The live crown ratio should be at least 60%. Small-diameter branches left on the lower trunk for about a year pruning help close pruning would and protect the tree by providing shade to that region. They also help hide pruning wounds. 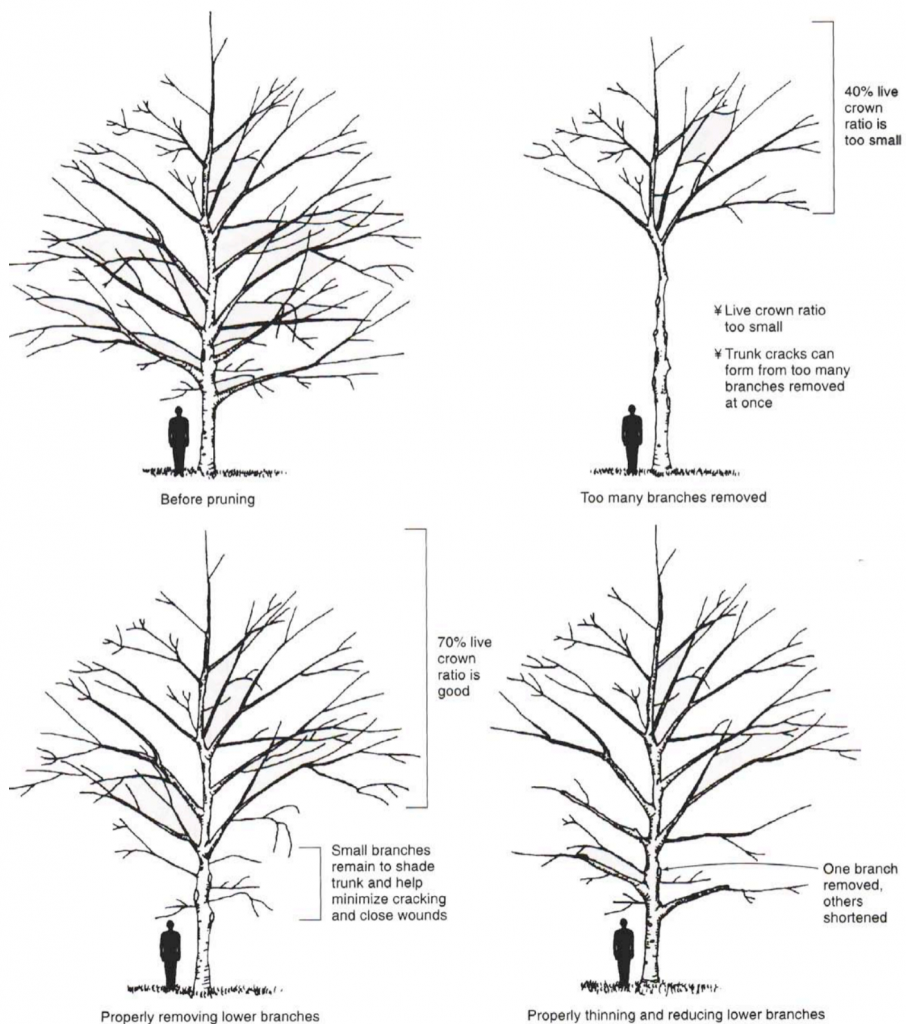 Prune to reduce both HEIGHT and SPREAD of the tree canopy using reduction cuts to an appropriate lateral. Cut back appropriate laterals (nothing larger than 1/3 the diameter of where the branch is attached) to reduce the height and/or width of a tree. Include deadwood and standard clearance. 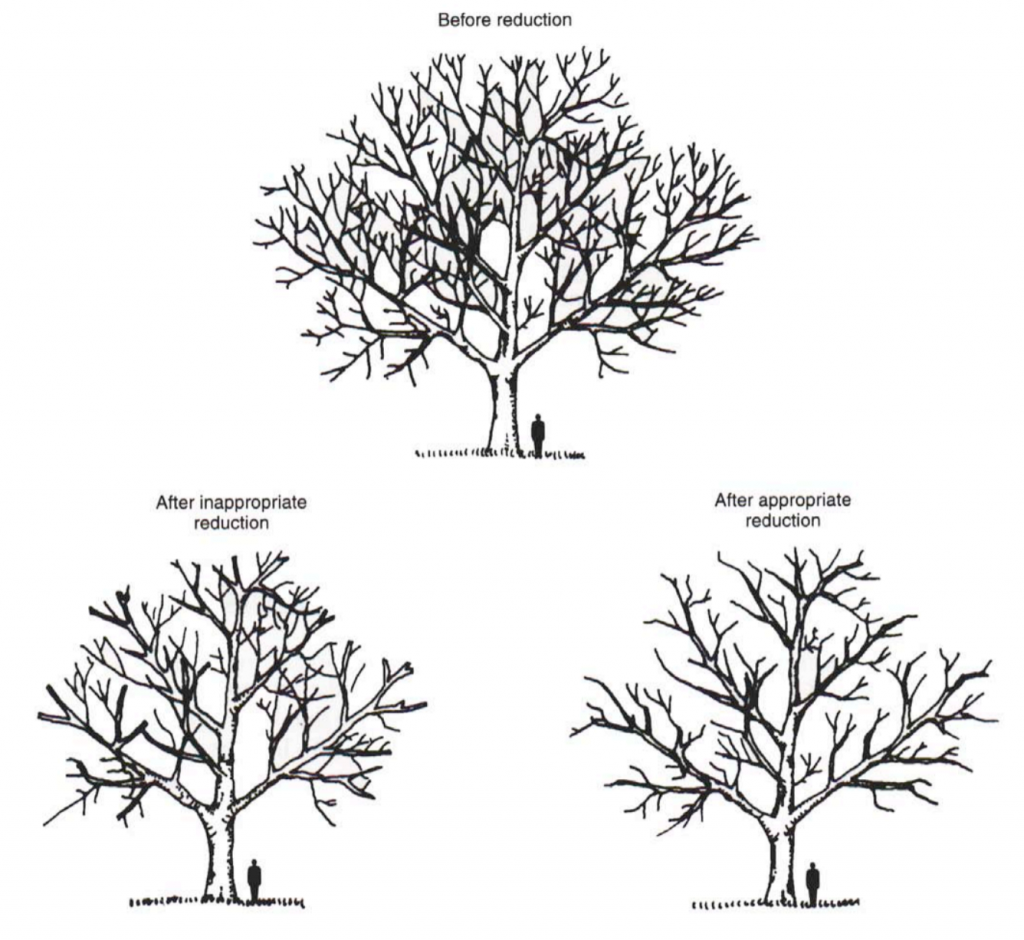 Crown thinning is no longer considered “Best Practice” in the tree care industry pruning guidelines. Should the client request this type of pruning or the Arborist feels this technique is a good option, the definition is as follows:

Selectively remove limbs to increase light and air in the tree’s canopy, and to reduce wind sail. Thinning shall be conducted by removing branches from the parent branch.

“Lions-tailing” shall not be performed. (Lion-tailing is the practice of removing only the inner branches closest to the trunk on a parent branch and leaving the branches located toward the end of the parent branch.)

Do not remove more than 30% of live foliage unless indicated otherwise.

Appropriate thinning removes small branches from the edge of the canopy (right).

All large-growing palms should be pruned to remove dead fronds and fronds with a petiole that droops below the horizontal.

Dead fronds are those with less than 50% green tissue. All seedpods should also be removed including those originating among remaining fronds.

When removing fronds and seedpods, care shall be taken so those fronds that are to remain are not nicked or wounded.

Risk reduction pruning is mainly for larger and more mature trees when structural pruning is no longer an option.

The goal is to mitigate risk of branch failure in the tree by:

The structure of a tree can only be corrected in the younger stages of growth. If the tree is mature, then Risk Reduction pruning may be more appropriate (see definition above).

The goal of structural pruning is to increase the structural integrity of a tree and encourage a healthier and more stable tree in the long-term. 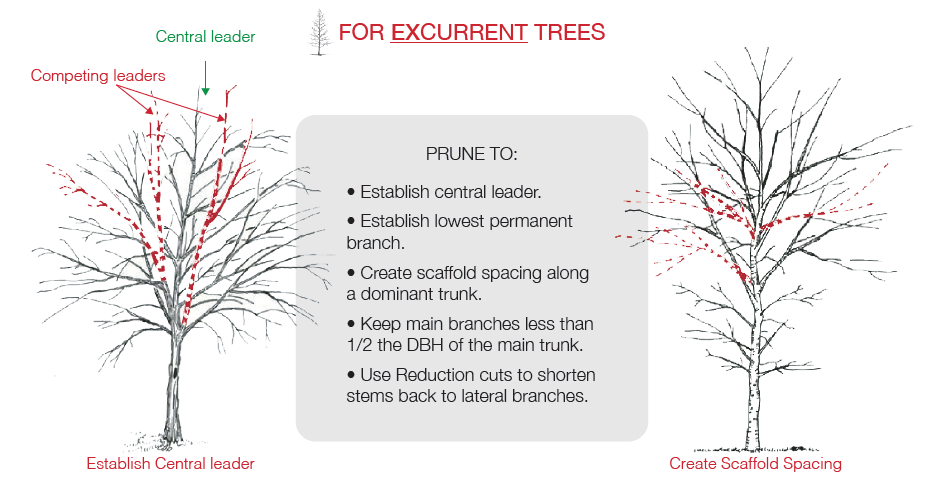 Co-dominant leaders are considered to be two or more branches, trunks, or leaders of approximately the same size, originating in close proximity to one another.

Due to the recognized potential hazards associated with the co-dominant leaders, the subordination (shortening using a reduction cut) or removal of one side of a co-dominant leader is the primary objective. The main leader should not be subordinated, headed or removed.

Young tree training may arguably be the most important stage of pruning. It sets up the tree for a life-long growth structure.

Shorten vigorous, aggressive branches in the permanent nursery canopy using reduction cuts. If two vigorous branches are growing opposite one another, shorten one (lower right branch ‘a’) more than the other (lower left branch ‘b’). The one shortened the most will grow the slowest. The other one will become the one main branch at this point. 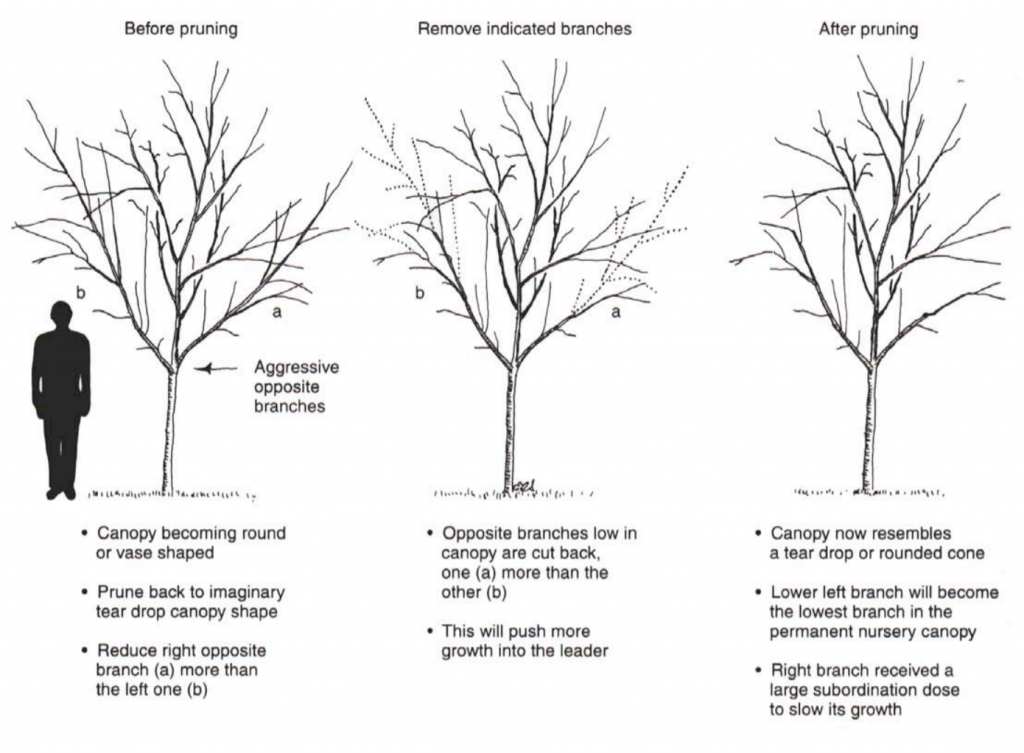 Note: In order for a tree to be category 5, it must possess all 3 conditions. In order for the tree to fall under categories 4-1, it only needs to satisfy 1 or more of that category’s conditions.

See Glossary of Terms
Also of Interest
Go to Top