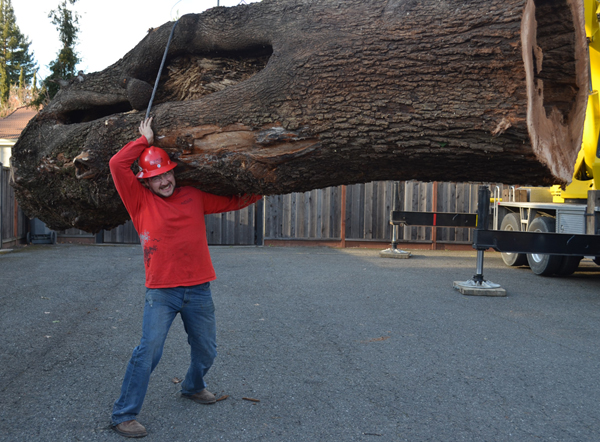 Last week, the A Plus Tree crew performed the extraordinary task of removing 6 huge American Elms in 1 day! The trees were so large, it took a crane to help remove the massive logs piece by piece. At almost a century old, these trees have been a staple of the community and will leave a noticeable clearing along the tree-lined Danville Blvd in Alamo. Unfortunately, the County of Contra Costa had no choice but to remove them. Infected by Dutch Elm Disease and dying, the towering limbs were no doubt a hazard to the children attending the Alamo Creative Learning Center, as well as the traffic on the boulevard.

Dutch Elm Disease is caused by an aggressive fungus (Ophiostoma-ulmi) that kills elms regardless of their health. The disease causes extensive decay, severely comprising the structural integrity of the tree. What’s even scarier is that the extent of the decay is unknown until the tree is cut down; Some of the trees removed were so badly decayed, that it went through the entire trunk of the tree!

Stay tuned for the behind-the-scenes footage of the removals.