Read about recent happenings at A Plus Tree 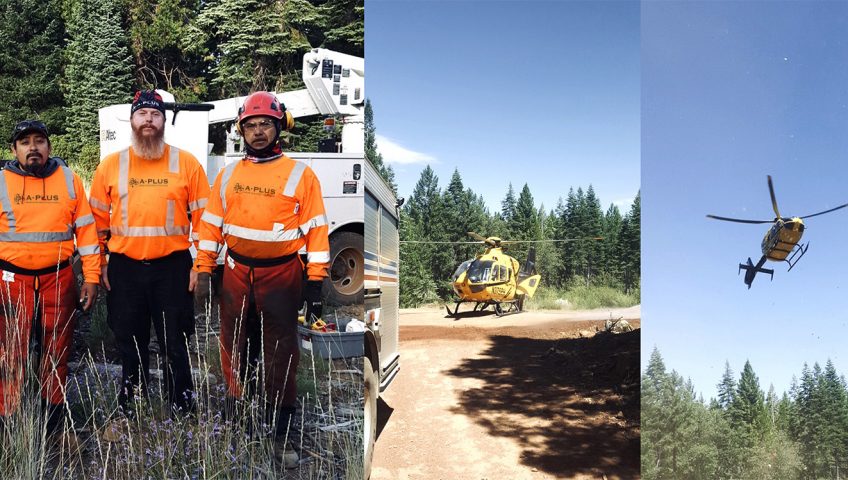 David Ingalls and his crew were on a job in Burney last Thursday, 4 hours north of the Bay Area, and deep into the heart of the woodlands.

Their assigned duties involved brush clearance of a pipeline that runs into Oregon. Because of the steep terrain and rocky areas, the crews have to navigate through a maze of logging roads in search of better access points.

Ingalls and the crew were traveling a logging road towards the job site when they came to a fork in the road. He was about to take a left, when he saw movement out of the corner of his eye.

Naked and covered in dirt, a man was crouching in the brush in the shadow of a tree. Using the last of his energy, he held up an arm and tried to call out.

Ingalls approached suspiciously at first, instinctively scanning his surrounding for anything that looked “off”. He got out of the truck, and as he got closer, made out the words, “Help. Water.”

He quickly realized the man was in bad shape, and his training kicked in.

He ran back to the truck to grab water and call 911.

With the completed JSA & Emergency Action plan on his dashboard, he had his GPS location, numbers to the Burney Fire Department and the closest hospital.

While waiting for help to arrive, Ingalls periodically checked the man’s vitals.

The ambulance got lost on the roads, so Ingalls was patched directly through to the Fire Department to guide them and the Med-Evac helicopter to the scene.

The helicopter successfully found the location, landed, loaded the man and flew him to a hospital in Redding.

According to Burney Fire Dept’s initial assessment, the man must have been out there for a couple days without food or water. He was several miles from any paved road, and crawling in the wrong direction. Judging from his condition, he would not have survived another night.

Ingalls said, “It was perfect timing that we came to the “Y” in the road as we did. Assessing the situation, seeing the hidden dangers, and being prepared for an emergency are all part of the training.”

Thank you David Ingalls, Juan Ochoa and Arturo Lopez for doing what we hope every person would do in your situation. You are a blessing and we are honored to be able to support the great work you do!

A Plus Tree is a cutting-edge tree care company with a ridiculous passion for trees. We offer ridiculously forward-thinking solutions to better serve you and your community. We are dedicated to our client’s needs, the sustainability of our precious environment, and the betterment of each urban forest we have the privilege to come in contact with.